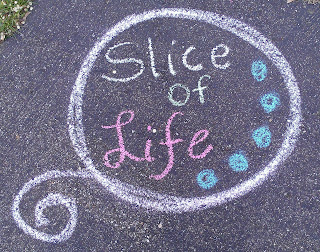 Today is CHALK-A-BRATION and Slice of Life! Two things that put an instant grin on my face. :)
If you can't chalk today and want to link later this week I will still add you to the post. On Poetry Friday, unless the weather is uncooperative, I will be chalking again and link back to this post for blogosphere friends to see.

My students will be doing their chalking during the day so I will update this post as the day goes on, comment on other chalkers and add their links.

Here are my a-brations to chalk about:


I love the shadow on this one. Below the chalk is the typed version of this quote from Osho's book, Courage: The Joy of Living Dangerously. There were no line breaks in the text of the book but I broke it up to fit my canvas. 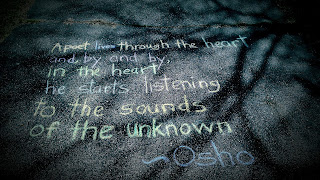 "A poet lives through the heart and, by and by, in the heart he starts listening to the sounds of the unknown." ~Osho

Here is a notebook peek into my chalk poem:

Wet pavement put a damper, literally, on my chalking all of April. It was a clear beautiful weekend until it started raining AGAIN! But, got my chalk done and only had to endure a little sprinkle. 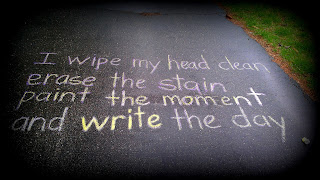 
MY STUDENT'S CHALKING
Drum roll...finally...here is my class and their chalk-a-bration poem with pictures and words!


Linda from TeacherDance improvised her chalk today using an app (smart idea). Here is her poem about the appreciation of bees.

All the way from Singapore some first graders from The Learning Adventures of Grade 1AC chalked some Haikus. Check out their hard work and beautiful chalky words.

Mary Lee joined in to share a poem about Oak Pollen, quite clever she is. Take a peek here.

Robin, at Teaching Tomorrow's Leaders chalked with her students today...with a very nice improvisation on the canvas! She also added her own poetic words, that are well, chalk-tastic, you'll see what I mean.

Cathy at  Merely Day by Day also had a chalky share about capturing moments, it is a beauty.

AND...now Ms. Mere's students add their poems to the mix and there is a lot to celebrate when it comes to their poems!

Mrs. Frazier's first graders from Ohio got their hands dusty with some great chalketry. Check out their awesome work here!

Ms. Mac's emerging writers share their experience and their chalk. You have to see these little ones working and writing, great stuff.

Slice of Life is hosted by Ruth and Stacey at Two Writing Teachers. 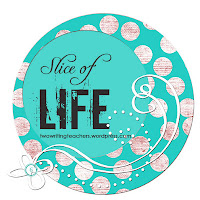 I Think in Poems


I almost always get ideas when I am in the car for slices, poems, school work, student next steps all those things that swirl in our heads. Maybe it is the scenary. I have a beautiful drive. Maybe it is me trying to block out the, "he's touching me...she's poking me" that is inevitable in my tiny Matrix.

My point. I realized today that when I am in writing mode I begin to think in poems. I was asked what I was thinking the other day and I wrote what I was thinking...it was a poem. Unintentional. I am now writing poems without intention, hmmm, I think that might be the best kind.
People (not a lot mind you), in the blog world have said, "you should publish your poems." I can't say I have no desire to do this but my poems are for me and obviously the people I share them with here. However the idea of publishing is sort of exotic isn't it? It is like that thing that you can't touch because it might go extinct or get damaged if you mess with it. I wonder if I got published if I would feel my poems like I feel them when I just write them for me. I wonder.
Then as I pondered this thought, I wondered, what would the name of my book be? Immediate answer, I THINK IN POEMS. I love the title of my non-existent book. It is me.
Then I realized that every title has to have a poem that goes with it, well, at least I think it should.
So, I wrote two versions of my title poem.

We have had so much rain I haven't been able to chalk. Maybe this week...fingers crossed. However, I do hope you will chalk a poem with me on April 30th here and link it so others may enjoy your CHALK-A-BRATION too.
What, what did you say, you want to know what CHALK-A-BRATION is...click here!
Posted by Betsy Hubbard at 9:18 PM 8 comments:

Email ThisBlogThis!Share to TwitterShare to FacebookShare to Pinterest
Labels: Poetry, slice of life

Some love poems on a cold and snowy (really?) day in Michigan.

Love was wearing a mask
For fear of revealing itself
Love blanketed the wanting and feeling
Passing the places of strangled hearts
Love crossed the moat
Trudging through depths of happiness
Love boxed itself up and resided on a shelf
Trapped in the lost and found
Love imagined what might have been
If only it had taken off the mask.
The above poem was inspired by the Wordle below. It was made up of many lines and unused parts of poems that I have in one of my notebooks. I didn't require myself to only use those words but I let it inspire some new ones with a personified dark contrast to the idea of love.
Posted by Betsy Hubbard at 5:30 PM 7 comments: 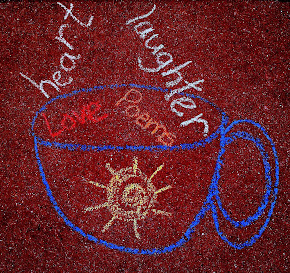